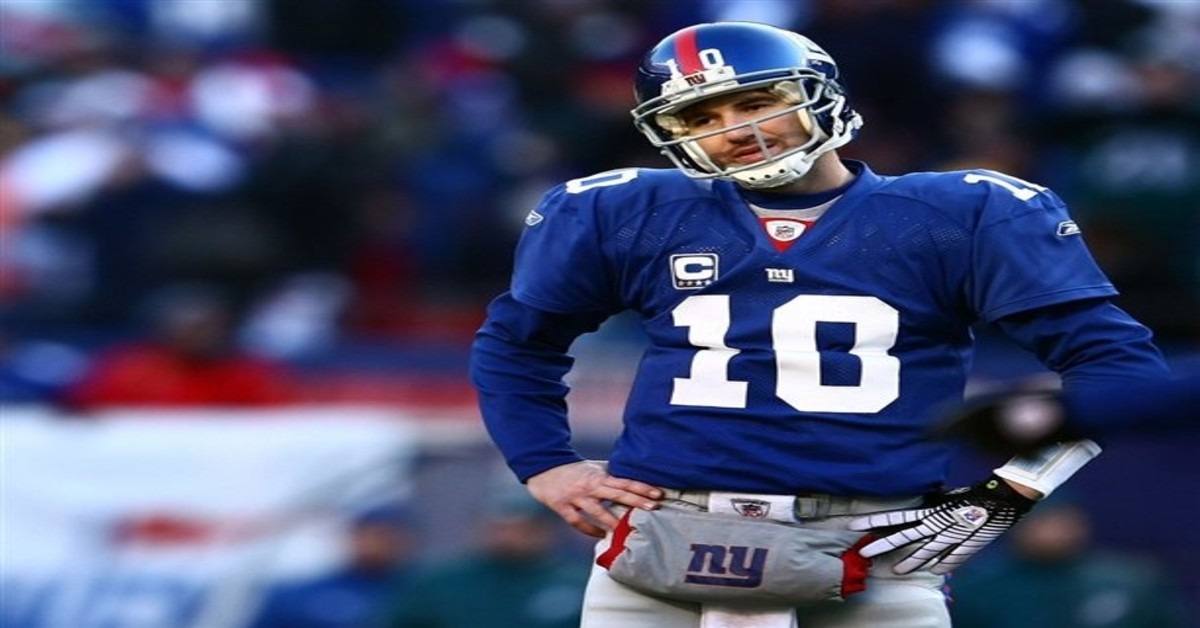 Good morning ladies and gentlemen, and welcome to a new edition of “The Triple Double”!

Normally, I try to do this column every two to three weeks, but there is too much going on in the sports world for me to stay silent this week. This time, we’re going to visit our friends in New York (including a return trip to our northern brethren in Buffalo), say farewell to a sports icon, and in an exclusive, we’re walking into the world of wrestling. In the words of De-Generation X…

Allow me to be clear: this is not meant for fans of the New York Jets, who may have a legit chance at finishing above .500 this season. But if you are a Buffalo Bills or New York Giants fan…listen to me now, and believe me later on.

First, let’s take a look at the New York Giants organization. This off-season looked like they were starting to make a push to win and win right now. They drafted running back Saquon Barkley with the number two pick in the 2018 NFL Draft, then signed wide receiver Odell Beckham, Jr. to the richest contract ever for his position. Yet, in what has looked like a weak NFC East division…the Giants are 1-5 on the season and on track for another top-5 pick in the 2019 draft.

You can’t blame the defense, despite losing a pair of winnable games in Dallas and New Orleans. You can’t blame Barkley, who has led the team in rushing in every game this season (and has led twice in receiving, which is criminal when you have a guy like Beckham). And Beckham? Sure, he runs his mouth more than he should. That being said, a wide receiver is only as effective as his quarterback makes him, so where does the fault lie?

Repeat after me now: ELI MANNING.

You can point out his 210 consecutive starts or the two Super Bowl rings all you want, that’s all good and dandy. But if you’re going to use that as a baseline for why he should still be the starter in 2018, allow me to point out why he shouldn’t be:

Going into the off-season, the Giants knew damn well that the time had come to start looking to the future regarding the quarterback position. Yet, all three positions of power (owner John Mara, general manager Dave Gettleman and new head coach Pat Shurmur) felt like they could still win with Manning. They were so confident that the current backups for Manning are Alex Tenney, a journeyman from Monmouth College (not the university in New Jersey) and Kyle Lauletta, a fourth-round pick from the University of Richmond. To get an idea of their pedigree, Monmouth College hadn’t produced an NFL quarterback since 1928, while Lauletta is the first quarterback from Richmond in 30 years (Bob Bleier, who suited up for three games in 1987 with the New England Patriots during the strike).

There was a plethora of talent available at the quarterback position that New York could have chosen first, then still have the ability to draft Barkley later on. By choosing to spare Manning’s feelings, they have doomed their season. At this point, they don’t have a choice but to stick with Manning, because honestly…they can’t turn to their backups.

And now, we travel closer to the Canadian border, where our friends in the Buffalo Bills are in need of an intervention. I’ve already gone in-depth about their troubles (I only said they were the worst sports town in America), but what went down last week only cements the fact that they should just call it quits on the season.

Rookie Josh Allen, who happened to be the only “competent” quarterback on their roster, hurt his elbow in the second half of Sunday’s game against the Houston Texans, a game that was surprisingly close. With him hurt, the Bills had no choice but to turn to Nathan Peterman and yeah…that didn’t end well. With Allen possibly out for this coming week as well, the Bills couldn’t just stand pat and let Peterman throw himself into an early grave.

But it’s okay, Bills fans. Don’t worry; your savior is on his way. And his name is…Derek Anderson (you thought I was going to say Colin Kaepernick, didn’t you? It’s okay, I thought that was the move they should have made as well). Anderson, who hasn’t started a game in two years and hasn’t won a game in four, has been named the starter for Week 7; a move that head coach Sean McDermott probably didn’t want to make, but had to if he stood any chance of keeping his job.

Allow me to give a timeline of how bad the Buffalo Bills have bungled this quarterback situation:

I’m fully aware of how bad the rest of the offense is and believe me, they share some of the blame too. But the Bills had a capable quarterback in Taylor and got rid of him simply because McDermott wanted his guy in. That move may single-handedly cost him his job when this season is all said and done, and he’ll only be able to place the blame on himself.

2) THE PACIFIC NORTHWEST LOSES AN ICON

There are plenty of interesting stories to talk about now that the NBA is back, but I feel like this is the most important story right now, so I’m going to touch on it.

Paul Allen, who had owned the Portland Trail Blazers since 1988, passed away on Monday at the age of 65 from non-Hodgkin’s lymphoma. Allen, who also owned the NFL’s Seattle Seahawks and was co-owner of the MLS’ Seattle Sounders FC, first found notoriety as the co-founder of Microsoft, where he remained on the board until 2000, when he first learned of his diagnosis.

Allen, who grew up in nearby Seattle, bought the Trail Blazers at the young age of 35, telling the Associated Press at the time that “for a true fan of the game, this is a dream come true.” Allen oversaw a burgeoning renaissance with the franchise, as they reached the Finals in 1990 and 1992 (losing to the Detroit Pistons and Chicago Bulls). During Allen’s 30-year tenure as the Trail Blazers owner, the team has only missed the playoffs seven times.

ESPN’s Adrian Wojnarowski had this to say about the late Allen on Monday:

On the late Paul Allen: Without him, NBA would’ve abandoned the Pacific Northwest long ago. Howard Schultz sealed Seattle’s fate by selling Sonics to Oklahoma’s Clay Bennett, but Allen committed his resources to keeping the Blazers in Portland. The league’s far better for it.

Allen is also responsible for the NFL remaining in the Pacific Northwest. In 1996, previous owner Ken Behring had announced that he would be moving the Seahawks to Southern California. Being the homegrown man that he was, Allen agreed to purchase an option for the team that would be triggered only if Washington voters passed a 1997 referendum to foot the majority of the bill for what would become CenturyLink Field.

Since then, the Seahawks have been to three Super Bowls, winning it all in 2014. They also have made 12 trips to the playoffs (after having only made four appearances since their 1976 inception) and made CenturyLink Field one of the most feared places to play in the NFL.

Having lived in the Pacific Northwest for a year, I understand how passionate those fans are about the Trail Blazers and Seahawks. My condolences go out not only to the Allen family, but to those in both organizations and the fans in Oregon and Washington. They have truly lost an icon.

It’s not often that we talk about professional wrestling here at The Ball Out, so when we do you know it has to be huge.

For those who live under a rock, former Strikeforce and UFC Women’s Bantamweight Champion Ronda Rousey joined WWE in January and immediately made an impact. After making an appearance at the Royal Rumble pay-per-view, she was launched into a feud with Raw commissioner Stephanie McMahon and her husband, Triple H (Executive Vice President of Talent and 14-time world champion), whom she faced and defeated in a tag-team match alongside fellow Olympic gold medalist Kurt Angle at Wrestlemania 34. From there, Rousey went on a tear, winning the Raw Women’s Championship from Alexa Bliss at Summerslam in a match that critics praised as her true arrival into WWE.

After winning the title, she was embraced by Brie and Nikki Bella (aka the Bella Twins), who went on to act as her closest friends…that is, until October 8, when they ambushed Rousey after winning a six-woman tag match against the Riott Squad.

On Monday night, the champion came out to the ring expecting an explanation. After laying the foundation with a passioned speech early, Rousey was interrupted by Nikki Bella, who claimed that she was sick of Rousey being credited as the face of the Women’s Revolution.

The response from Rousey was something straight out the Ric Flair School of Promos (thanks to WrestleTalk for the transcript):

The only door you ever knocked down was the door to John Cena’s bedroom . . . And he eventually threw you out of that exact same door.”

To see this beauty along with the beat down she placed on security afterward, check out the recap video from WWE:

Considering that the majority of wrestling experts thought that Rousey would be a flop, she has done surprisingly better than expected early on. She may not be the best on the Mic, but is slowly getting more comfortable. Going into the all-women PPV, “Evolution”, on October 27, the feud between the current Raw Women’s champion and the longest-reigning Divas champion has gotten extremely personal.

Thank you again for taking time out of your day to read this column. I am beyond thankful for your support.

Clippers’ Ballmer in intense negotiations to buy The Forum