Skip to content
You are here:Home-Featured, Other-Cast of ‘Annabelle Comes Home’ shine at world premier
Previous Next

Los Angeles, CA — Tonight was an amazing experience meeting and interviewing the cast and crew of ‘Annabelle
Comes Home’ of The Conjuring Series. The star studded cast was incredibly gracious as they paused for interviews on the Red Carpet. In fact, Alec Ward and Luca Luhan stopped by and spoke with me for a little. Ward chatted a bit about the Horror Movie Industry, stating that his mom and him actually used to watch horror movies together, so he has been a huge fan of this scene since he was a kid.

And the adorable Luca Luhan, shared me all about his biggest fears growing up — besides the scary dolls. He told me he was actually pretty terrified of riding a bike. Hey, we all have our own fears, right Luca?!

Tonight was such a special night, as we covered 🎤🎥 the @annabellemovie 🔴 Red Carpet Movie World 🌎 Premiere ✨📸! Such a wonderful event! Our host @meredith_vancuyk 🎤 had a great interview with one of the characters from the film!! Thanks 🙏 to @warnerbrosentertainment for having us out!!! . . . . . #annabellecomeshome #annabelle #movie #movies #redcarpet #moviepremiere #lifestyle #instagrammers #igers #instalove #instamood #instagood #iphoneography #theatre #video #instapic #hollywoodlife #hollywood #horror #horrorlife #lifestyleinspo #lifestyleblog #actors #celebrities #fashion #stilllifephotography #flashesofdelight #photooftheday #shootandshare #gatheredstyle

Thursday night’s red carpet was decked out with an abundance of incredible Annabelle Comes Home props, including an Annabelle doll replica, which I have to admit, was a little bit scary to see in person. The historic Regency Village Theater was alive with the terrifying energy of this deadly film, based on the true story of Ed and Lorraine Warren. 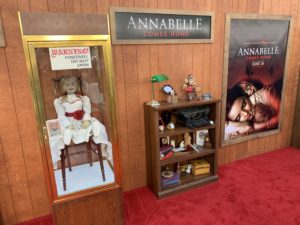 Annabelle display at the premier. Meri Vancuyk/The Ball Out

This iconic ghost and paranormal hunting couple took the ultimate risk to by taking this evil possessed Annabelle doll into their care to protect others from the wicked forces dwelling within her.

‘Annabelle Comes Home’ is a MUST SEE movie if you are a fan of the paranormal, mystery, thriller, or dramatic filmography. It is the third installment to the popular and world renowned Conjuring series.

The series has lead up to this highly-anticipated film that is guaranteed to keep you up at night and on the edge of your movie theater seats. It is sure to win many awards for its amazing and intricate special effects.

About the Author: Meri Vancuyk