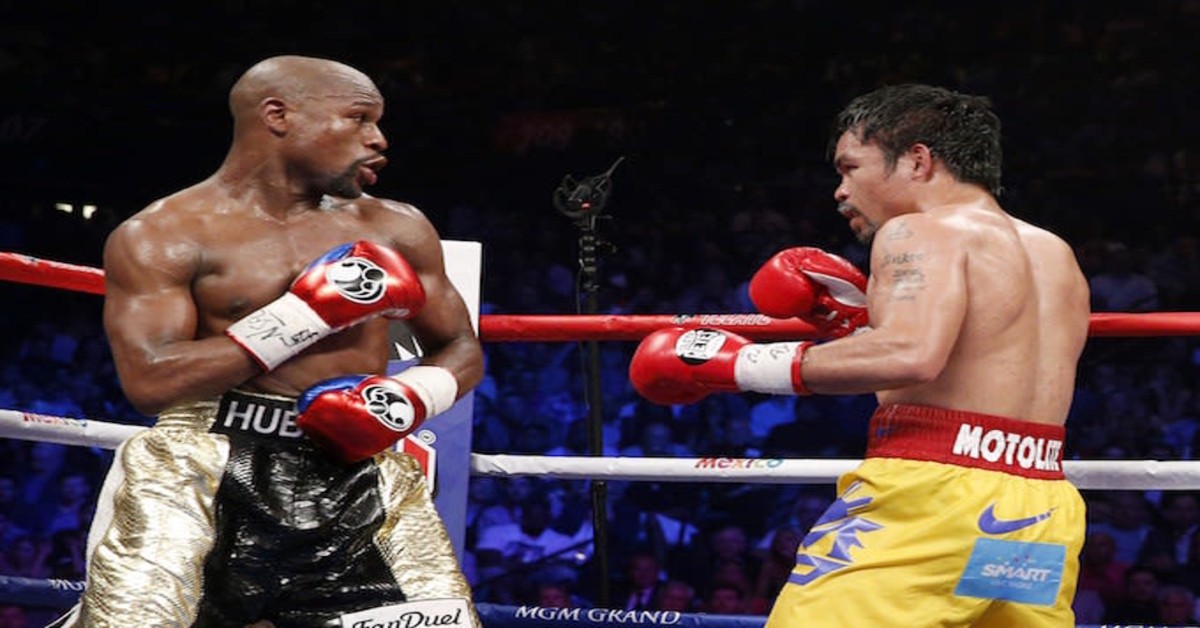 After defeating Connor McGregor last August, Floyd Mayweather Jr. announced to the crowd that this fight would be his was his last. In addition, we hadn’t heard any rumblings about Mayweather making a potential comeback to the ring. That is… until last night.

In an Instagram video filmed in Japan, the undefeated Mayweather captioned the video announcing that he’s, “coming back to fight Manny Pacquiao this year. Another 9 figure payday on the way.”

I’m coming back to fight Manny Pacquiao this year. Another 9 figure pay day on the way @mayweatherpromotions

While no specific date has been announced yet, Mayweather is aiming for the fight to happen in December. Pacquiao, also shown in the clip, asked Mayweather whether a belt would be on the line. Pacquiao also seemed shocked to hear Mayweather talking about a possible rematch.

Mayweather and Pacquiao fought back in 2015 in what was the most lucrative Pay-Per-View event of all time, generating over 4 million buys.

Mayweather won the fight by unanimous decision, however, Pacquiao stated that he wasn’t 100 percent during the fight because he had a torn rotator cuff. Plenty of fans were disappointed to watch a fight where both competitors weren’t at full strength.

Since then, Mayweather has retired after he defeated McGregor. Pacquiao continues to fight and has won three of his last four fights. His most recent fight against Lucas Martin Matthysse he won by knockout to claim the WBA title.

Rumors of a rematch between the two have swirled ever since 2015. However, with the first fight not being as entertaining as many thought it would be, boxing fans are not excited about seeing a possible rematch.

Should the two fight in December, both could possibly be in their forties, and it’s believed that a rematch would struggle to secure half the original buys.

Pacquiao also posted the video on his Twitter about the upcoming fight.

There’s a belief that the fight that happened in 2015 should’ve happened five years ago when both were at the top of their games. However, in my estimation, Mayweather knew what he was doing by essentially dragging the inevitable bout five years later than when it should have been fought.

Father time is undefeated. In addition, Pacquiao for years has relied on his speed and ability to get inside and tag his opponents with several hits and win fights. That’s his main objective.

Yet, that’s exactly the opposite of what Mayweather likes to do. Mayweather’s plan is to not get hit, and he’s been successful throughout his career not to take damage from his competitor. Hence, the undefeated record.

So, now Mayweather fights a Pacquiao, who’s five years older and can’t do what he may have been able to do at a high level, and makes it look easy. Mayweather makes him miss and able to tag him enough times to win the fight. Like Mayweather or not, it was a genius plan.

What Mayweather did in waiting to fight Pacquiao is pretty genius and is something everyone does. You find an advantage and exploit it. Now you may not wait five years to exploit a weakness, but if it means you’ll win in the end, you take that time.

Personally, it’s not surprising that no one is going to break the bank to see a rematch. In sports you like excitement. You love the dunks in basketball, big tackles in football, fights in hockey, crashes in NASCAR, and knockouts in boxing.

However, Mayweather is a defensive fighter and isn’t the type to go into a fight and want to knock his opponent out. And getting two guys who would be in their forties, if this fight takes place, this fight would be a lot slower than the first. This works to Mayweather’s advantage because he doesn’t want to get hit, but, Pacquiao looks to hit as many times as he can and potentially knock you out.

Although, that game plan didn’t fare Pacquiao so well in the first match, injured or not.

So if that’s the case, even with a healthy Mayweather and Pacquiao, this fight would have the potential of ending like the first one. Therefore, equaling a boring fight in the eyes of boxing fans.

You understand why people don’t want to see this fight. Mayweather already told you what this fight means to him: another payday. In addition, he’s playing into Pacquiao’s head because he knows Manny loves to fight regardless.

So with all that coming into play, get your popcorn ready, because we may be in store for a Mayweather-Pacquiao 2 in a couple months.

Middleweight Title: Will Canelo or GGG win the rematch fight?