Los Angeles, CA — “Change needs to be made, it’s as simple as that,” said Charlie Rivers. Rivers is a loyal Lakers fan from Anaheim, California. However, he currently resides in Phoenix, Arizona while being a graduate student at Arizona.  Like many Laker fans, he is fed up with the franchises decision making and elected to come back home to share his opinion about the front office. Rivers was the coordinator and initiator for Friday afternoon’s protest.

“This is about the way they are taking the basketball operations,” Rivers stated in terms of the Lakers’ management of Rob Pelinka (general manager) and Jeanie Buss (owner). 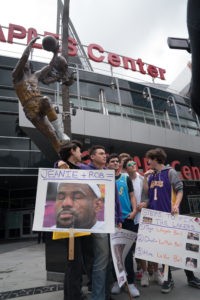 Fans protest the Lakers’ front office outside of the Staples Center. Photo by Chandler Allen/The Ball Out

An impromptu protest was decided on Wednesday night and two days later was taking place outside of the Staples Center in downtown Los Angeles. Rivers drove over from Phoenix Thursday night to attend what he organized. He showed his dedication to getting through to the Lakers management to let them know fans are not pleased.

“You know, if you care about this so much why don’t you organize a protest,” Rivers shared on how a friend urged him to do a protest to voice his opinion.

It was a very inspiring decision to take initiative for something you believe in. The protest was about 30 individuals who came fully prepared with face paint, signs, chants, and Los Angeles Lakers jerseys. 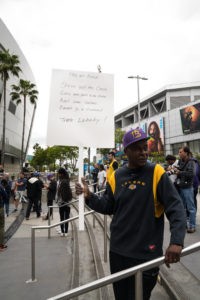 A Los Angeles Lakers fan holds a sign during the protest. Photo by Chandler Allen/The Ball Out

I asked one fan named John — who was a local fan — what upset him the most about the Lakers situation right now.

“The thing that’s really stressful about it is that I grew up with Kobe, Shaq,” he said reminiscing about the years and history where the team had a phenomenal run. “These last five plus years have just been really, really sad, and you’d think, we have LeBron who is arguably the best player in league and were still not even close to being relevant. So I think that management really needs to look themselves in the mirror and figure out what’s best for the organization.”

Hopefully fans like John and Rivers keep getting heard and showing their support while respectfully asserting their belief in what’s best for the team. It comes from a place of loyalty, concern and support for their favorite team and these fans were passionate.

Many drove from far areas of California and Arizona to be there and in attending. But, among those protesting were also Clippers’ fans who did not hesitate to troll its rivals organization.

Rivers and other fans can look back knowing they received the media’s attention and hopefully the mangaement’s too with hopes of their efforts leading to a brighter future for the Los Angeles Lakers.

EXCLUSIVE: Interview with @Lakers protest organizer Charlie Rivers, who calls out the #Lakers for their "ineptitude" and calls for "changes". Also, footage of today's protest which includes some trolling from @clipperdarrell #LakeShow #NBAPlayoffs #NBAPlayoffs2019 #LeBron #NBA pic.twitter.com/CcVZdyhlIN

About the Author: Chandler Allen