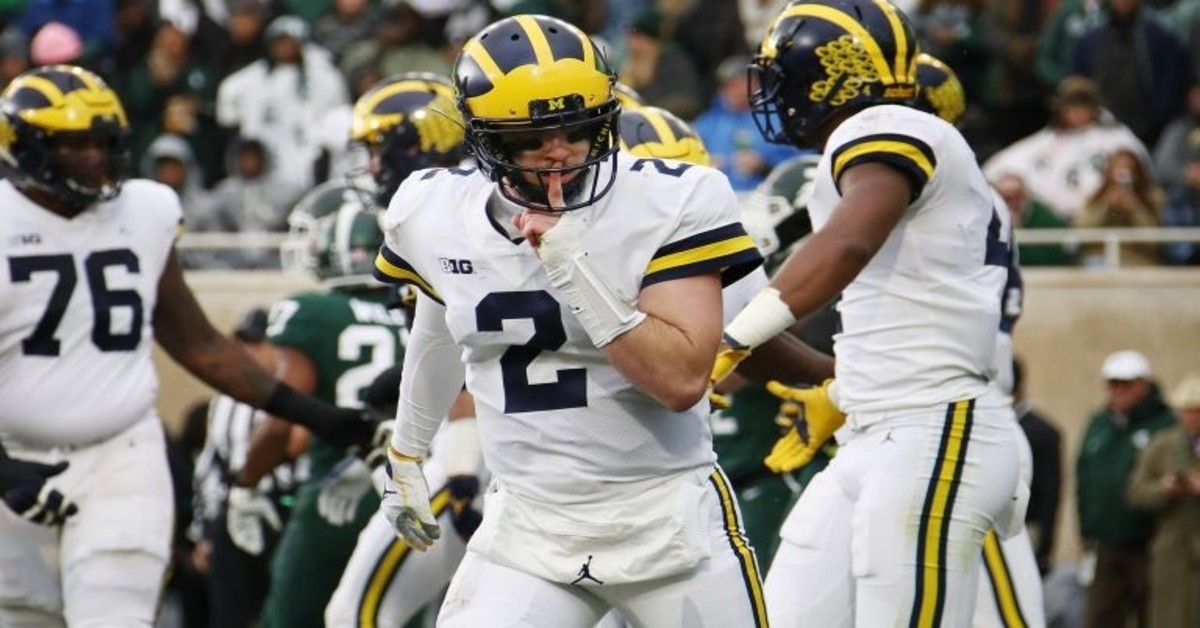 The annual “Paul Bunyan” game between the No. 6 Michigan Wolverines (7-1) and No. 24 Michigan State Spartans (4-3) already had plenty of intrigue by itself.

With no shortage of animosity between the two teams, the Wolverines came to East Lansing ready to snatch the Paul Bunyan trophy back from the Spartans after losing four of the last five matchups.

Then the lightning struck.

With 5:15 left in the first quarter, officials suspended the game due to a lightning storm in the East Lansing area. At the time of the suspension, the game was tied at zero. When the game resumed an hour and a half later, Michigan went on the attack. After seven minutes of possession, the Wolverines struck first.  A Shea Patterson toss to tight end Nico Collins gave the Wolverines a 7-0 lead.

The pass from Patterson also broke a long streak: it was the Wolverines’ first pass touchdown against Michigan State since 2011 (Denard Robinson). However, the defense was the highlight of the first half. Michigan’s defense forced the Spartans into six punts in the first half, while the special teams forced the offense to an average field position of their own 17-yard-line. Going into halftime, the Spartans only had 49 yards of total offense (0-for-5 on third down conversion) while Michigan had 170 net yards.

In the third quarter, the Spartans finally began to show signs of life. With 12 minutes left in the third, Michigan’s Chris Evans fumbled at their own 7-yard-line, which was recovered by MSU’s Brandon Bouyer-Randle. A trick play from Darrell Stewart, Jr. to quarterback Brian Lewerke tied the game at seven apiece. The offenses got a bit sloppy in the third quarter as they battled a continuous downpour of rain, as the two teams had three fumbles in a matter of six minutes.

The Wolverines would recover later in the quarter, as Patterson connected on a 79-yard bomb to Donovan Peoples-Jones to put them back on top 14-7.

Michigan wasn’t done yet. With 10:21 to go in the fourth quarter, Ben Mason carried the ball five yards to put Michigan up two scores. The Spartans’ offense failed to gain any traction, which made it easy for the Wolverines to hold the lead for the remainder of the game.

This game had Michigan written all over it, as the Wolverines led in every offensive category. They had 395 total yards to the Spartans’ lowly 94 and held the ball for nearly 23 more minutes.

As mentioned earlier, these two teams do not like each other, as the two teams had a combined 13 penalties for 139 yards and saw two players carted off the field. With the win, Michigan’s playoff chances remain fairly strong; as for Michigan State, they’ll be staring at the mirror for a while after this demoralizing loss.