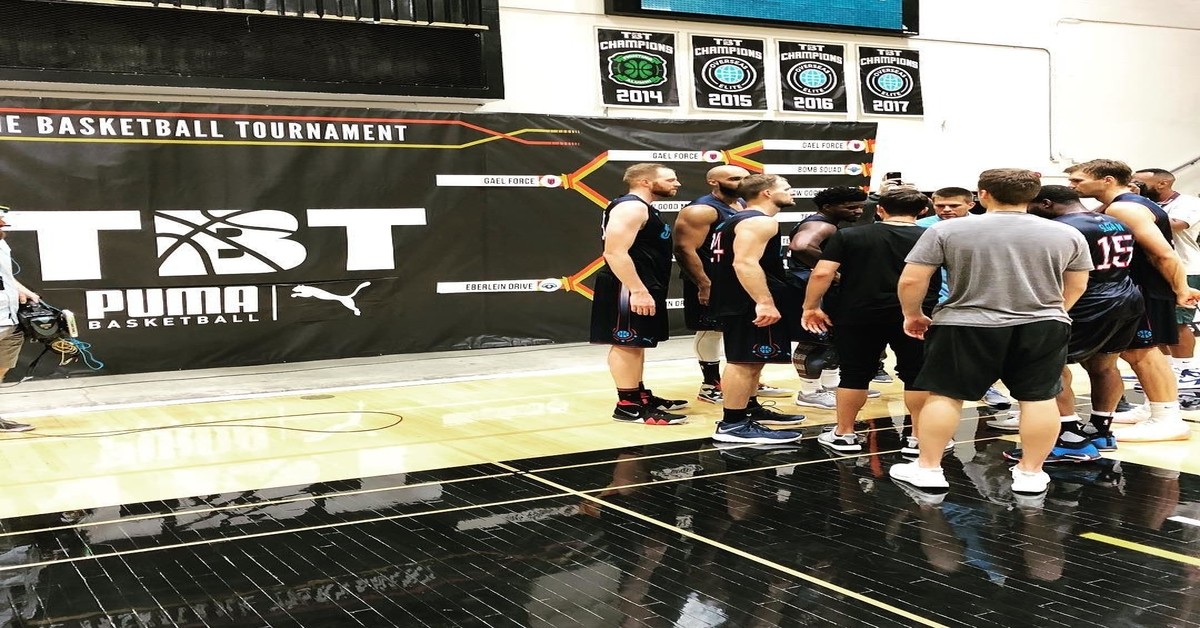 Los Angeles, CA – The Western Region Round 2 of the Basketball Tournament, or TBT, was played at California State – Los Angeles in the 82-degree summer heat.  The first game was Eberlein Drive against Team Colorado, while the second one was between CitiTeam Blazers and Team Challenge ALS.  The final game was between Albuquerque Hoops and Sons of Westwood. All six teams put up a great effort, but at the end of the day, only three are still alive in the tournament.

The TBT games were very entertaining to watch on Sunday!  The first game was easily my favorite from the start.  To begin with, a few summers ago, Sports Illustrated dubbed Eberlein Drive the “worst team in the tournament,” so they came back to prove them wrong four years later.

They boasted a stacked roster and with sharpshooter Donald Sloan, who has five seasons of the NBA under his belt. Sloan finished up with a strong 32-point performance as he was 6-9 from the three-point line to lead Eberlein Drive.

Leading the way for Team Colorado (alumni from the University of Colorado), was Chris Copeland who tallied 17 points and pulled down five rebounds. Team Colorado also have Colorado’s all-time leading scorer Richard Rob who had a solid night, finishing with 13 points and six rebounds. His teammate Shannon Sharpe, did the dirty work in the game with his defense, key rebounds, and his shooting ability. Whatever needed to be done, Sharpe was doing it for Team Colorado in hopes of not being eliminated from the tournament.

Marcus Hall’s simple game plan of put his head down and get to the lane was successful for Team Colorado as he finished with 22 points.

Despite a handful of players being key for Team Colorado, Eberlein Drive had a big play from Jerome Randle. He came through with the little things the entire game, but no shot was more important than when he hit a clutch three late in the game. He had missed the previous three shot attempts but got the ball to fall right when his team needed it the most.

With four minutes left in the game, the clock stopped and each possession became even more important.

Already a unique tournament with money on the line, there’s a rule in the TBT that with four minutes left in the game, the clock stops and a target score is set. Crazy right?

The target score is always set to seven points more than the leading team has at that point in the game. In this case, the Drive was up and needed only seven more points to continue its quest for the prize money of $2 million.

Team Colorado put pressure on Eberlein Drive, but in the end, the Drive knocked down two free-throws to close the game as they reached the target score of 83 while Team Colorado sat at 76. Not only was their win impressive to close out a tight battle, however, the Drive did so with only six players.

Eberlein Drive proved this summer, they won’t be considered the TBT’s worse team.

After an exciting game one for the night, CitiTeam Blazers, and Team Challenge ALS took the court. Both teams began struggling with easy layups looking equally anxious to get the game going.  Eventually, though, the nerves would settle.

The Blazers are formed from the best of the best in the Drew League which simply put, is California’s Best.  Bobby Brown performing as expected with 29 points and five rebounds, yet his team found themselves on the losing end.

Ultimately two major keys that hurt CitiTeam Blazers were their lack of defense down under the basket, as well as not being able to hit important free-throws. In fact, as a team, they were 35.7% from the charity stripe.  Even though the Blazers’ defense was weak on the interior, one player who didn’t disappoint defensively was Franklin Sessions.

Even going against the number one team in the bracket in Team Challenge ALS, Sessions continued to do keep their elite players in front of him and get stops. Yet, his efforts weren’t enough as Team Challenge ALS ran away with the game and eliminated CitiTeam Blazers with a final score of 72-59.

The third and final game of the night started off neck and neck, but the Sons of Westwood prevailed behind the play of Jordan Adams who led the UCLA alumni team with 22 points and nine rebounds.

DeAndre Lansdowne had a strong night for his Albuquerque Hoops with 19 points and three rebounds and his teammate Drew Maynard chipped in with 16 points and eight rebounds.  The combined efforts of Lansdowne and Maynard could not slow down the Sons of Westwood though as the UCLA alumni are still alive in the TBT after taking home a 76-62 victory.

Other than countless questionable calls from the ref, the basketball tournament was a hit and ESPN is doing a great thing by combining the social media world and the physical sport of basketball to create a fun and interactive event.

With all the basketball found on TV these days, name another tournament that allows fans to not only vote for which teams they want to play all summer but who can also receive some of the $2 million prize? There isn’t another, and the basketball tournament isn’t disappointing fans or players.

The West Region winning teams, Eberlein Drive, Team Challenge ALS, and Sons of Westwood all advance to the Super 16 in Atlanta, GA July 26-29. The South Regional champion will advance to the Semifinals in Maryland on Aug. 2 against the Northeast Regional Champion.