Skip to content
You are here:Home-Entertainment, Other-San Diego’s first-ever wings feast a big hit
Previous Next

San Diego, CA — ‘Twas a perfect day at the end of July.

The cool ocean breeze, the sun shone bright but bearable, and the sound of horses clopping around the dirt track in front of hundreds of spectators. What could have completed such a perfect day? If you’re thinking chicken wings, then you would be correct. And there was plenty to go around.

The Del Mar Fair served as host to the 2nd annual Del Mar Wing Feast, a gathering of some of the best food and wing vendors in all of San Diego County. And trust this writer, the vendors did not disappoint. From Mexican-style wings to Cambodian-style fare, the Wing Feast had it all, and then some. 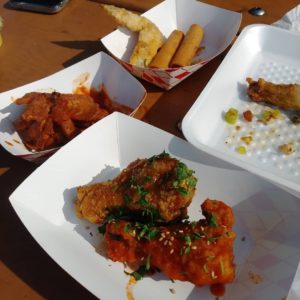 Dale S’Amante, the founder of the new festival, said that the idea for it came from wanting to break from the normal San Diego food fare.

From the moment you walked into the festival, the smell of smoked meats and grease consumed your nostrils. With seven different vendors and over 40 different wing options, you couldn’t make a wrong decision no matter where you ate. The first vendor we visited was Smokin’ J’s, a BBQ vendor and catering service based out of Rancho Bernardo. Known for their smoked specialties (pork belly, duck roast, and chuck steak chili), my wife and I wanted to see if their wings were for real.

My wife tried their “Ragin’ Cajun” wings, while I sampled a wing simply known as “Gonna’ Kill Ya’ Hot”. The first bite was full of deliciousness, as you absorbed the taste of peppers and special ingredients. However, it’s not until you take the next few bites that you realize, “oh my God, I need a drink…now”. That didn’t stop me from finishing that wing, though.

The next stop we made was to Kalei’s Kitchenette, a brand-new family-owned caterer based in Scripps Ranch. Specializing in Pacific Rim infusion, Kalei’s wings were definitely worth the price. While their wings come naked, you get a choice of one of their five delicious sauces: Guava BBQ, Thai Coconut Curry, Garlic Parmesan, Gojuchang Korean and their newest creation, Kalei’s Tantrum (this reader’s favorite).

Andy Mangiduyos (executive chef) and his wife, Khara, started the catering service out of a desire to create something they could call their own.

“I was an executive chef for Hyatt Hotels for a long time,” Andy said. “Our last stop was in Santa Clara, right across the street from where the San Francisco 49ers. After a while, I told my wife, “I want to be my own boss. We have our kid, let’s move closer to home.”

The best part about it so far, Andy said, is that it’s his own creativity.

“We’ve only been in business since June, and we do primarily street fairs and festivals for now,” Andy said with a smile. “But the feedback has been positive. People love the sauces, especially the curry.” 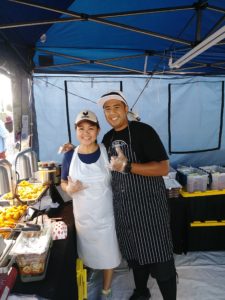 Other vendors at the festival included Po’s Cambodian Street Food, Roberto’s Catering Services (their garlic wings are a must-have), Gringo’s Tacos, Full Belly BBQ, and Belly Bombz from Artesia, just south of Los Angeles. Their soy caramel wings were possibly the best wings that I or my wife have ever had.

The festival also had plenty of beer and wine vendors, and also included a live performance from San Diego’s own Grammy Award-winning rock band, Switchfoot.

It was no surprise to see why the Del Mar Fair chose to bring back the Wing Feast, a celebration of food and of people who were not afraid to venture out and build from the ground up. I look forward to seeing this continue hopefully for many more years to come.

About the Author: Chris Bullock

Before joining The Ball Out, Chris Bullock was part of SB Nation's Swish Appeal for nearly three years, covering everything women's basketball. Chris has had the honor of doing live coverage of the WNBA Finals, the NCAA Tournament, and also was given his own column, "The Triple Double". A self-described "foodaholic", Chris lives in the San Diego area with his wife and two daughters, and also hosts his own podcast, "Conscious Cravings", where he speaks about his experience as a mental health advocate.