The Ball Out
NBA 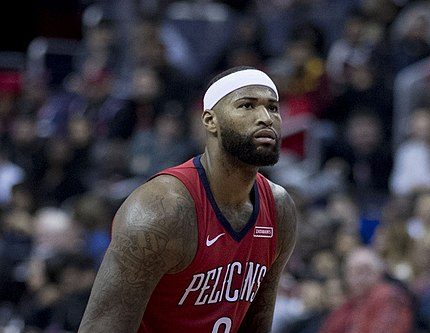 To quote the famous hip-hop group. Tag Team, “Whoop, there it is”.

In a special edition of The Ball Out’s “NBA Monday Marathon”, we break down the biggest shocker of the NBA free agency period, along with other important moves that went down.

But first, we’re going to discuss the move that broke NBA Twitter.

Just as we thought the free agency period couldn’t get more interesting, the back-to-back NBA champion Golden State Warriors made sure the world knew just how serious they are.

Late on Monday evening, Adrian Wojnarowski reported that the Warriors have agreed to a one-year, $5.3 million contract with center DeMarcus Cousins. Cousins, who had been in talk with the New Orleans Pelicans and Los Angeles Lakers, is coming off an Achilles injury and isn’t expected to return the court until January 2019 at the earliest.

Cousins, whom newly minted Lakers forward LeBron James considers the best big man in the game, instantly makes the Warriors the undisputed favorites to win a third straight championship. Before getting hurt last January, Cousins was averaging 25.2 points and 12.9 rebounds a game for the Pelicans, who had hoped to re-sign him to team with fellow big man Anthony Davis.

While the Lakers had serious in obtaining Cousins to team him up with James, there had been rumblings that Cousins didn’t want that at all, as The Ball Out had tweeted out earlier:

As we told people this week in the league, DeMarcus Cousis DID NOT want to play with LeBron James, and many scoffed at that notion. Paul George said no, DeMarcus said no to the #Lakers — and took less money to do so as well #NBAFreeAgency

Considering that Cousins is legitimately one of the top two best big men in the league when healthy, this move is a serious surprise. Cousins had the potential to make nearly $200 million if he re-signed with New Orleans, yet he took less money on what could only be considered a “bet on yourself” deal. However, as The Athletic’s Marcus Thompson tweeted out earlier, the Warriors were looking to improve at the center position:

As me and @timkawakami has discussed many times on the Warriors Plus/Minus pod, the Warriors have been wanting a scoring center. They believe that is the next level for the franchise

Cousins has history with the Warriors as well, as he played on Team USA in 2016 with Draymond Green, Kevin Durant and Klay Thompson. So we know they can gel together. But with that being said, we are now looking at a Warriors team with five All-Stars in their lineup once Cousins returns from injury. They were already odds-on favorites to win the championship next season; this move may have sealed the deal

The New Orleans Pelicans are looking to build a young core of their own, as evidenced by their latest acquisition. On Monday, the Pelicans swooped up forward Julius Randle from the Los Angeles Lakers, who had renounced his rights only hours earlier.

Randle, who averaged a career-high in points (16.1) and rebound last season (8.0), was initially a restricted free agent and was ecstatic about the possibility of teaming up with new teammate LeBron James. However, the Lakers made it clear they did not plan to match any offer sheet that would force them to commit for the long term and mess up their financial flexibility. Once that was made clear, Randle requested that they renounce him, as he was intent on not taking a reduced role.

Once that was granted, Randle instantly became one of the hottest remaining commodities on the free-agent market. However, it didn’t take long for the Pelicans to focus on him, as their franchise star (and former Kentucky teammate) Anthony Davis recruited him to come to New Orleans.

This now sets up a core three of Davis, Randle and point guard Jrue Holiday. With Randle being able to defend multiple positions, this opens up a lot more room for Davis to focus in the paint while also freeing him up offensively. That being said, this move was essentially a sign that they knew DeMarcus Cousins was not going to re-sign.

In a surprising move, the Los Angeles Lakers signed point guard Rajon Rondo to a one-year deal. Rondo, who had another offer from the New Orleans Pelicans (whom he played for last season), will be battling second-year guard Lonzo Ball for the starting position.

Rondo, who is known for his high basketball IQ, averaged 8.3 points and 8.2 assists during the regular season, but upped that total to 10.2 points and 12.2 assists in the playoffs, where he helped guide the sixth-seeded Pelicans to a four-game sweep of the third-seed Portland Trail Blazers before getting eliminated by the eventual champion Golden State Warriors.

However, in my view, this move was less about Rondo than it was about another Pelican, center DeMarcus Cousins. Not only do Cousins and Rondo have a history together (they played together in Sacramento, and Cousins was reportedly upset when the Kings didn’t re-sign Rondo), but it was Cousins that recruited Rondo to come to New Orleans.

There was no doubt that they made this move specifically to try and lure Cousins, bit as we wrote earlier, it looks like he wasn’t at all interested in teaming up with the biggest superstar in the game. That being said, the Lakers will probably try and focus all their efforts on acquiring All-Star forward Kawhi Leonard from the San Antonio Spurs.

Chris Bullock
Before joining The Ball Out, Chris Bullock was part of SB Nation's Swish Appeal for nearly three years, covering everything women's basketball. Chris has had the honor of doing live coverage of the WNBA Finals, the NCAA Tournament, and also was given his own column, "The Triple Double". A self-described "foodaholic", Chris lives in the San Diego area with his wife and two daughters, and also hosts his own podcast, "Conscious Cravings", where he speaks about his experience as a mental health advocate.
Share
Facebook
Twitter
Pinterest
WhatsApp

Taormina, Sicily, South Italy -- From the moment I was invited to Taormina Film Festival (TFF), I felt excitement rushing through my body. Having...
NBA

Despite Kyrie Irving opting into his contract earlier this week, Kevin Durant doesn't want to be in Brooklyn anymore. The All-Star has requested a...
Current News

Since the beginning of June, the House Select Committee has been investigating the attack on the U.S. Capitol on Jan. 6. The committee is...
Entertainment

After having Kevin Durant, James Harden, and Kyrie Irving sign with the Brooklyn Nets prior to the 2021-2022 season, the buzz was this team...
Previous articlePhoenix loses starter to season-ending knee injury
Next articleHaters going to hate — appreciate all greatness