Boston, MA — What do you think of when you hear the words patio, beer and barbecue?

The Samuel Adams Boston Brewery hosted their fourth annual pig roast on Friday, May 11, which signified the start of summer and also American Craft Beer Week.

With over 500 people in attendance, there was no shortage of excitement as Bostonians enjoyed the beautiful, fun night.

“We do this every year. We basically honor all the amazing beer that not just our brewer at Sam Adams, but brewers all over the country are doing, and craft breweries everywhere,” said Brewery Manager Adam Cupples.

With the taps continually cracking, people were able to pair their selection of Samuel Adams beer with delicious barbecue from Blue Ribbon.

“We always produce specialty beers, and tonight we’re releasing a barrel aged chocolate chili book called “The Vixen,” said Cupples. “And were roasting up three pigs and pairing up with our friends at Blue Ribbon BBQ. We’ve got two different bluegrass bands, and it’s just a really special night for us here.”

The barbecue was prepared all day, starting to roast the pigs at the crack of dawn at 6 a.m. Once they were done smoking, the chefs showed the crowd how they dress the pigs, before doing a cutting demonstrating.

Following the cutting demonstration, the fresh pulled pork was put out for attendees to indulge, and pair with chili, baked beans, cornbread, and more.

Could you tie together Samuel Adams and Blue Ribbon BBQ more? Well, yes, yes you can.

The two powerhouse brands teamed up to create unique sauces to dress the various selections of pulled meets, using special Samuel Adams beer as a base when making the sauce. 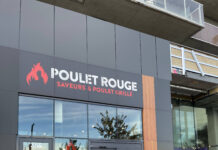 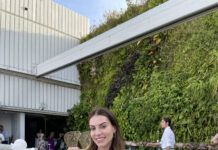 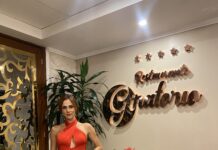