For the second time in his Presidential term, the House of Representatives has voted to impeach Donald Trump.

Trump is being charged with inciting the attack on the US Capitol building on Jan. 6. This vote by the House makes Trump the first president to be impeached twice. The first time the House impeached him was in 2019 over his handling of Ukraine. However, months later in 2020, the Senate acquitted him.

Despite the impeachment today in the House, the Senate will not convene until next week as U.S Senate Majority leader Mitch McConnell won’t call for an emergency meeting to impeach Trump.

There were 10 Republicans who voted to impeach the sitting president.

McConnell stated the following on his decision to not call for an emergency meeting in the Senate: 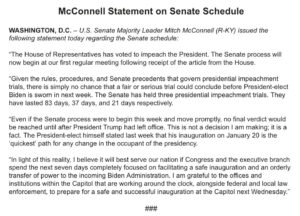 Donald Trump has just become the first US President to be impeached twice following a vote in the House of Representatives https://t.co/bDsmp7JAMe

One dead after shooting at Austin-East Magnet High School

Mike Robinson - April 13, 2021 0
Vanderbilt has their next coach, multiple sources told The Ball Out late Monday night. UConn assistant Shea Ralph will be moving on from the...