Skip to content
You are here:Home-Other-‘Maiden’ takes fans through raging seas, explores women’s empowerment
Previous Next

Beverly Hills, CA — I had the chance to see “Maiden”, a documentary that follows the background, forming, and journey of the first ever all-women sailing team. The Whitbread crew actually competed in the Ocean Race, a yacht race around the world held every three years. 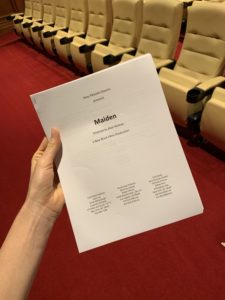 Notes on “Maiden”. Photo by Meri Vancuyk/The Ball Out

The documentary starts with Tracy Edwards, the woman who formed this team. She takes us through her early life, as well as her spontaneous and nomadic lifestyle. In addition, “Maiden” dived into why Edwards was so driven and determined to do what she set her mind to, which was sail. She formed an amazing and strong team of women that stuck together despite the issues with discrimination, hate, financial struggles, pressure, and egos.

“Maiden” featured several women from this sailing team, who gave you different and personal insight of their experience. It was SO interesting to hear all the different sides of the same story.

Overall themes I picked up on were that of woman empowerment, breakthroughs, expanding and opening people’s minds to the “impossible” or “unthinkable”. I was surprised at the amount of content this documentary presented to the viewer. In every step of the journey there was video and photo coverage to where I didn’t feel like I was visually deprived. You experienced the formation, struggles, stress, and journey with the women through coverage of building up to the starting line and throughout each leg of the race. I was mind blown at how the camera always seemed to be rolling and catching the situations the team would be in.

View of the movie theater prior to the screening starting. Photo by Meri Vancuyk/The Ball Out

With this documentary being the official selection of the Tribeca, Sundance, and Toronto International Film Festivals, I was eager and excited to see how it would be structured. I was truly in awe of this sailing culture. Although it’s something I am not familiar with, it was educational and interesting to see how physically and mentally demanding sailing can be. Moreover, what it takes to be a true sailor.

I would absolutely recommend this documentary to everyone! Especially if you are looking to expand your mindset and learn about cultures that you are not exposed to.

At the end of the documentary, a slide came up that said Maiden sails around the world to raise funds for girl’s education. I thought that was an amazing thing using this journey and breakthrough to change the lives of girls across the world.

I would love to see this documentary again and I encourage others to open their mind to the world of sailing.

About the Author: The Ball Out Staff