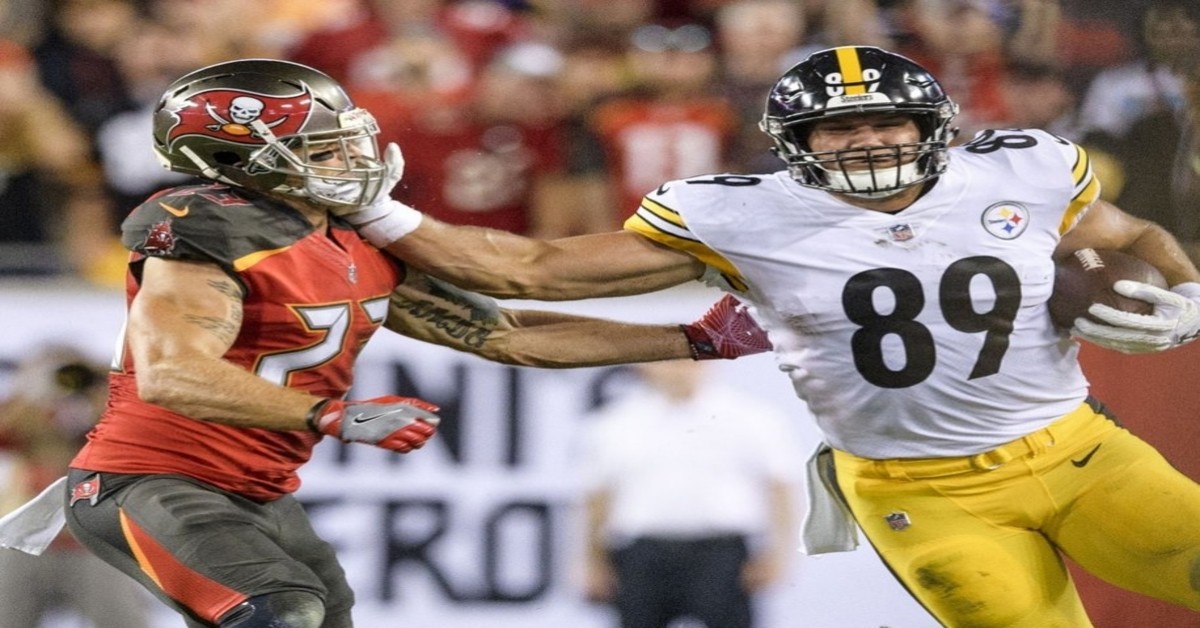 Tampa Bay, FL — The Tampa Bay Buccaneers (2-1) were one of the feel-good stories to come out of the first two weeks of the NFL season, thanks to quarterback Ryan Fitzpatrick.

But the Pittsburgh Steelers (1-1-1) weren’t hearing any of that. Despite throwing for 411 yards, the Buccaneers couldn’t overcome Fitzpatrick’s three second-quarter interceptions as they lost 30-27 on Monday night.

The Buccaneers, fueled by “FitzMagic”, had only thrown one interception going into the Monday night game. However, the Steelers’ defense made Tampa Bay work for all of their 27 points. Fitzpatrick was under duress or sacked on 40 percent of the dropbacks, including three sacks. The three first-half interceptions on Fitzpatrick represented a career-high for him.

Pittsburgh set the tone for the game early on in the first half, scoring 23 unanswered points after the Buccaneers got on the scoreboard first. Of those scores, none of them were as emphatic as the first touchdown from Steelers tight end Vance McDonald. With 5:48 left in the first quarter, McDonald took a pass from Ben Roethlisberger and slanted left. Buccaneers safety attempted to bring down McDonald, and essentially was forced into early retirement with a forearm that would make WWE Champion AJ Styles proud:

Coming into the second half, though, the Buccaneers were not shaken and began the long march toward a storybook comeback win. Chandler Catanzaro started things off with a 28-yard field goal to cut Pittsburgh’s lead to 17, then Fitzpatrick, doing his best Shane Falco impersonation, let loose his cannon arm. With 11:06 left in the game, wide receiver Chris Godwin was first on the board with a four-yard loft to bring the score to 30-20.

Then, with 8:40 left and starting on their own eight, Fitzpatrick led the Buccaneers all the way up the field to Pittsburgh’s 24-yard line. Once they got there, Fitzpatrick let out a long loft to wide receiver Mike Evans to cut the lead down to three. Unfortunately for the Buccaneers, the three points were as close as they would get.

In the battle of quarterbacks, Fitzpatrick may have won the battle but Ben Roethlisberger won the war. “Big Ben” was 30-of-38 for 353 yards, three touchdowns, and only one interception. Fitzpatrick, despite the loss, did set a couple of records. In throwing 30-for-50, Fitzpatrick became not only the first QB in history to throw for 400 yards in three straight games to start the season, but also became the first QB to throw for 400 yards, three touchdowns, and three interceptions in one game.

The big question for Tampa Bay after the game has to do with someone who wasn’t on the field. Quarterback Jameis Winston, after missing the first three games due to suspension, is expected to be re-instated this coming week. After seeing how crucial a role Fitzpatrick has played this season, Tampa Bay head coach Dirk Koetter has a major choice to make: does he continue the hot hand (Fitzpatrick) or does he go back to the old tried-and-true (Winston)?

They’ll have six days to find out, as the Bucs will travel to Soldier Field to take on Khalil Mack and the vaunted Chicago Bears defense on September 30. Pittsburgh will get to host fellow AFC North rival Baltimore on the same day.