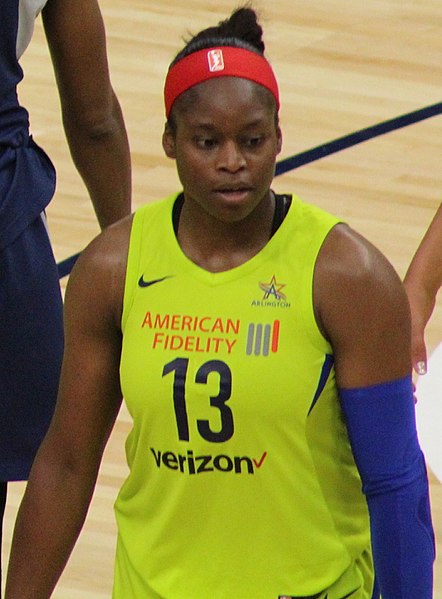 After suffering their first home loss of the season Tuesday, the Dallas Wings felt that they lost more than just a game that night.

One of the Wings top contributors, Karima Christmas-Kelly, is going to undergo a season-ending knee surgery and miss the remainder of the year.

Christmas-Kelly started six of seven games this season and played in all 34 games last season, averaging just under 30 minutes per game. The eight-year veteran not only is known for her ability to draw fouls and make strong drives to the basket, she is also a co-captain of the team along with Skylar Diggins-Smith.

The operation is to address an osteochondral defect in her right knee, with a recovery time of approximately six months.

“Karima will be truly missed this season,” said head coach Fred Williams. “Her mental toughness and leadership is something that can’t be replaced. We support her 100% on her decision to have the surgery on her knee. Knowing her, she will bounce back strong and continue her basketball playing career in the WNBA. She will continue to be a strong voice for us on sidelines to help develop our young team.”

The Wings were granted a roster hardship exemption and have signed Teana Muldrow from West Virginia. Muldrow was a member of the 2018 draft class and was drafted by the Seattle Storm in the third round (29thoverall) and will wear number 11 for the Wings.

While at West Virginia, Muldrow completed her collegiate career averaging 12.7 points and 6.8 rebounds per game. In her senior season alone she averaged 18.9 points per game and 6.8 rebounds. She was named a 2018 Associated Press All-America Honorable Mention and was recognized as one of five national finalists for the 2018 Cheryl Miller Award, which is presented to the nation’s best small forward.

“Any time a team loses a key contributor, it creates a challenge and what Karima means to our squad as a co-captain and leader is about so much more than just on-court performance,” stated Wings President & CEO Greg Bibb. “Karima is the ultimate competitor and I know she will face this setback like any challenge, and ultimately persevere. I look forward to seeing her return to the court as soon as possible. In the interim, this situation opens the door for our younger players to play more prominent roles for the remainder of this season. I look forward to seeing how they respond to this opportunity as we continue our quest to qualify for the playoffs and ultimately compete for a WNBA Championship.”

Rene' Kennedy - July 26, 2021 0
According to podtrac, the No. 1 podcast publisher globally is iHeartMedia. Today iHeartMedia announced it has entered a multi-year agreement with Sports Illustrated, Sports...

Scarlett Sloan - July 26, 2021 0
Hagerman, ID -- I had the pleasure of dining at a local hole-in-the-wall restaurant known as Bullzz-Eye BBQ. Good goodness. It was AMAZING! Walking...