Skip to content
You are here:Home-NFL, Uncategorized-Outside the Hashes: Not your father’s quarterback
Previous Next

Outside the Hashes: Not your father’s quarterback

Happy Thursday ladies and gents, and welcome back to another action-packed edition of “Outside the Hashes”!

We knew it was going to happen sooner or later, but the new wave of NFL quarterbacks are here to stay.

Not only are they here, but they have impressed fans across the league. Whether it was due to injuries, retirements or just good planning, there is a group of new quarterbacks that are shining when given their opportunity.

Let’s properly introduce you to those quarterbacks and tell you how they got here.

On September 17th, the New York sports world was given a slight sense of hope after the New York Giants officially named Daniel Jones the starting quarterback for their Week 3 match-up versus the Tampa Bay Buccaneers. The sixth overall pick received a lot of criticism since being drafted but had himself a great day in his first career start. 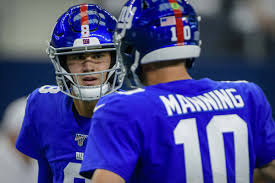 Daniel Jones and Eli Manning speaking to each other during a game. Photo by Getty

The rookie quarterback threw for 336 yards, two touchdowns and added two touchdowns on the ground in a 32-31 victory on the road. What was most impressive in his performance was his composure throughout the adversity his team faced. The Giants were down 18 points – plus star running back Saquon Barkley left the game with a foot injury –  and yet he still managed to bring his team back to victory capping it off with a clutch 7-yard touchdown run late in the game.

Where former starter Eli Manning was 0-44 in his career when his team is trailing by 18 points, Jones is already 1-0. The decision to start DJ should have been made earlier this season but better late than never as the saying goes.

When Nick Foles got injured in the Week One loss to the Kansas City Chiefs, Jacksonville Jaguars fans had to be shaking their heads in disappointment. Little did they think that Gardner Minshew, the 6’1” 225-pound rookie from Washington State, could keep them competitive, let alone win them games in 2019.

But lo and behold, Minshew and his magical mustache have lit a spark into this Jaguars offense since he took over and he picked up his first victory against the Tennessee Titans last Thursday night. The rookie threw for 204 yards and two touchdowns and could have a third had it not been for a drop by receiver Dede Westbrook. He looked comfortable in the pocket, protected the ball well, did not take a sack and threw very accurate passes all night like this one to DJ Chark.

Minshew has played with confidence in back to back weeks now and the Jaguars have to be feeling pretty good about their playoff chances once again.

The Baltimore Ravens came back down to earth last week, losing to the Kansas City Chiefs 33-28. However, quarterback Lamar Jackson continued his hot play on the year, throwing for 267 yards while adding 46 yards on the ground and one touchdown.

While the numbers may have digressed from weeks past, the total number of ankles snatched by Jackson’s elusiveness increased in Week 3. There were a handful of moments where Jackson made the Chiefs defenders look foolish trying to tackle him in the open field. None were better than this play here against Alex Okafor.

Jackson got his opportunity to start for the Ravens last season in November. He sparked the Ravens offense to a playoff run using his legs but the team had a disappointing performance against the Los Angeles Chargers in the Wild Card round. Fans and analysts had mixed feelings about Jackson and the Ravens offense in 2019 but they have done nothing but impress thus far.

Whether it is with his arm or his legs, Jackson continues to show that he is a special talent at the quarterback position.

Things were not looking good for the Carolina Panthers after an 0-2 start. Cam Newton looked like a shadow of his former self in last Thursday night’s loss to the Tampa Bay Buccaneers. The team elected to rest him Week 3 and start second-year quarterback Kyle Allen. 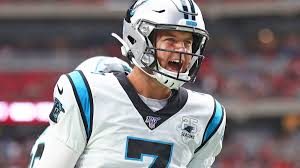 Carolina’s Kyle Allen celebrates during a game. Photo by Getty

Allen signed with the Panthers as an undrafted free agent last year but had the opportunity to start in week 17 against New Orleans Saints. While it was primarily against backups, Allen led the Panthers to victory and showed a lot of potential. That potential was displayed again in the 38-20 road victory over the Arizona Cardinals in week 3.

The 23-year-old from Arizona opened up the offense and threw for 261 yards and four touchdowns in front of his family and friends that were in attendance. Now, the Panthers don’t have to worry about rushing Newton back from injury and can continue to ride Allen’s hot hand.

Falling in the right direction for Buffalo

When the Bills drafted Josh Allen in 2018 they received criticism from their fans and analysts across the sports media outlets. Many thought Allen had the makings of a ‘bust’ but has done the exact opposite since taking over as the starter in week 2 of the 2018 season. 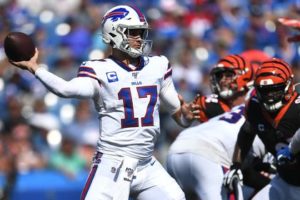 Josh Allen in progress of making a pass against the Bengals. Photo by Getty

While his accuracy and decision making still needs improvement, his play late in games has been huge for the Bills. In 2019, Allen has already led Buffalo to two game-winning drives and has them 3-0 early on in the season. The second-year quarterback orchestrated one of those drives late in the fourth quarter against the Cincinnati Bengals in a 21-17 victory in week 3.

No Andrew, but still a little bit of luck in Indy

Andrew Luck’s retirement right before the season startled fans across the league, especially Indianapolis Colts fans. However, little did they know they were left in good hands with Jacoby Brissett taking over at quarterback. The fourth-year quarterback had significant playing time under his belt, including 15 starts for the Indianapolis Colts in 2017 when Luck was out with injury.

This year, Brissett has the Colts off to a 2-1 start and has been very efficient while running the offense. He has 7 touchdowns through 3 games and has only turned the ball over twice. He led the Colts to a 27-24 victory over the Atlanta Falcons in week 3 and threw for two touchdowns in their home opener. He’s won over the locker room and is poised to keep the Colts’ playoff aspirations alive this year.

Houston, we don’t have a problem

In case you needed a reminder, Deshaun Watson was the third quarterback drafted in the 2017 NFL Draft right after leading the Clemson Tigers to a National Championship. Fortunately for the Houston Texans, Watson fell to them at the 12th overall pick and has since turned the franchise’s fortune around.

While Houston has not done the best of jobs protecting Watson, he continues to extend plays with his legs while keeping his eyes downfield to find the open receivers, like he did last week against the Los Angeles Chargers in a 27-20 victory.

Patrick Mahomes, duh. Mahomes may not be a ‘new’ name anymore to football fans after winning the MVP award last year, but I still wanted to include him here. What I love about Mahomes and how the Kansas City Chiefs handled the situation was wonderful. 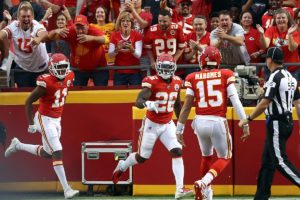 They sat him behind Alex Smith his rookie season so he could better learn the offense, they put weapons that best fit his skillset around him and they put an offensive line capable of protecting a quarterback in front of him. It sounds so simple yet we see time and time again teams’ struggle to do all three with their young quarterbacks, which can lead to situations like Luck or Newton were in. So props to the Chiefs organization for taking care of their young franchise quarterback.

About the Author: Noah Alvarez