Skip to content
You are here:Home-NBA-Achilles tear sidelines Durant in pivotal return, but Warriors survive
Previous Next

Toronto, ON— There will be a Game 6 in the 2019 NBA Finals as the Golden State Warriors defeated the Toronto Raptors 106-105, in what will be remembered as an all-time classic.

Golden State was playing absolutely fluid basketball with Kevin Durant back in the lineup for the Warriors. The big three of Durant, Stephen Curry and Klay Thompson accounted for 36 of the team’s first 39 points in the contest and Durant looked pretty good scoring all 11 of his points in the opening frame.

You could see how easy Golden State made the game look with their ball movement, spacing, cutting, looking for the open man and making the extra pass. The team started off the game nailing seven of their first eight shot attempts and cashing in their first five three-point shots. However, when Durant went down in the second quarter, the Warriors looked like they had saw a ghost and were in a nightmare they couldn’t wake up from.

Before Durant even left the floor, Golden State had a lot of possessions where they were playing very sloppy basketball. The Warriors had 16 turnovers in this game, which is what they’ve been averaging during the series. They seemed to forget how to dribble, they over-passed and were just making horrible decisions even late in the game.

The Warriors were dominated in every facet of this game. From fast break points, points off turnovers and were on the wrong side of the rebounding match-up as they gave up way too many second chance opportunities to the Raptors.

Yet, Golden State continued to find a way. Sure, they  weren’t great in every last detail when Durant went down, but they got it done when it mattered. In addition, how amazing is it for this team to have a guy like DeMarcus Cousins on their squad? Even if he’s out of shape, he’s proving that he’s still a top 25 player in the league.

With Durant done for this series, you’re looking for that third scorer yet again. It’s crazy to see that an out of shape Cousins, who finished with 14 points and six boards, is able to make such a big impact in such a critical series and in an elimination game. He made the right plays and was in the right spot in this game and really embodied what Golden State did in this contest when it came to not giving up.

You better had made your wishes on Golden State when it came to them shooting from the great beyond… cause they were nothing but shooting stars.

In the first four games for the Warriors in this series, they were 10-35 from downtown. Tonight, as a team they shot 42 threes, made 20 of them and it was all thanks to… the Splash Bros. Curry and Thompson combined for 12 of the 20 threes made by Golden State and you saw that they were not going to stop shooting it. If the Warriors were going to lose tonight they were going to lose with what has been their signature for the entirety of this dynasty. 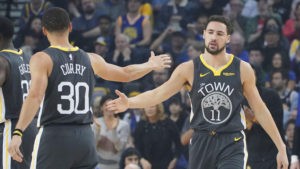 You couldn’t say the same thing for Toronto as they shot 25 percent from three-point range. Toronto couldn’t seem to find the touch from three if Nick Nurse had given them a map. Now they did handle the Warriors when it came to points in the paint (54-32). Yet, the Warriors have lived by this math principle: Three is more than two.

Golden State will live by the three and die by it. They live to see another game with the barrage of threes they hit in Game 5.

Tripped at the Finish Line

This game wasn’t like game 2 or game 4 where one team just hung around and then made that big push in the third. Despite dominating the Warriors in virtually every stat line, the Raptors really didn’t make this game feel close until the fourth quarter. In addition, before that time you kept wondering, “Are they going to do it now?”

And they did it.

Toronto’s final push in that fourth period was reminiscent of when the Titans were freed in the Disney film Hercules. Kawhi Leonard, who finished with 26 points, was that Titan that had that bloodlust look in his eye to take down the Mt. Olympus we know as Golden State. He scored 10 straight points in the final frame for the Raptors to help give them the lead late. It seemed all hope was lost for the Warriors. The end of a dynasty.

However, the Raptors tripped at the finish line.

Golden State, despite the magical run by the Raptors, responded with a 9-0 run to take back the lead, including a huge three from Thompson to give them the lead back. Every time in that quarter when you thought Toronto would pull away, Golden State said, “This isn’t how we’re losing”.

The Raptors have to be kicking themselves that they couldn’t finish the job.

Golden State will look to even the series on Thursday in Oakland at 9 pm ET on ABC.

About the Author: RJ Saunders