Cincinnati, OH — Behind the magnificent play of Andy Dalton and A.J Green, the Cincinnati Bengals (2-0) are undefeated following their win against the Baltimore Ravens (1-1) in an AFC division showdown. The Bengals walked away with a 34-23 victory.

Cincinnati had Baltimore’s number all night as they did a remarkable job of getting the ball upfield after settling for a punt following their first drive on offense.

The Bengals were fired up early in the game after forcing the Ravens’ quarterback Joe Flacco to throw an interception in only his second drive of the match-up. Following the interception, Cincinnati started to have their way with the Ravens in the first half. The offense constantly took the ball the length of the field and Bengals’ quarterback Dalton would capitalize on the drive. 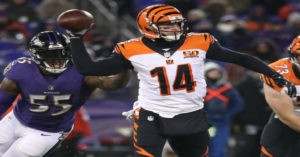 As dominate as Cincinnati’s offense was in the first half, its defense was also locked in. The Bengals’ defense did a great job the entire game closing up the pocket, as well as, closing the gap on Baltimore’s receivers. With this game plan, Joe Flacco was forced to make quicker reads, which led to bad decisions and ultimately two interceptions. However, by the way Cincinnati played on the defensive side of the ball, Flacco was lucky he only had two interceptions on his stat line.

Cincinnati was able to keep its defensive pressure high even though it lost starting defensive end, Micheal Johnson. Johnson left the game in the first half with an apparent knee injury and never returned.

By the conclusion of the contest, Flacco went 32-of-55 for 376 yards with two touchdowns and two interceptions. Although he improved during the game, he didn’t seem to really recover after throwing the first interception in the first half.

Penalties would also kill both teams in the first half of play. Costly Pass Interference calls put both teams up in great field position to have an opportunity to score on various drives. However, those opportunities worked more in favor of the Bengals than the Ravens.

In the second half, Baltimore had some very nice drives and made some great plays down the field to set themselves up for making a comeback. In fact, during the third, the Ravens had cut the Cincinnati lead down to as many as five, 28-23. However, you never felt that Baltimore would come back and win the game. The Ravens had some questionable play calling, including attempting to keep the drive alive on fourth down instead of punting, or attempting field goals.

Even though the Bengals didn’t come out on fire as they did in the first half on the offensive end, their defense still made it hard for Flacco to make up ground. Even with a former Super Bowl MVP cutting into the Cincinnati lead with help from John Brown, Alex Collins, and Maxx Williams, it wasn’t enough.

The Bengals’ defense sacked Flacco four times and the eight big hits Flacco endured during the game played a big role in him either over or under throwing passes to his receivers. It was an absolute smothering display by Cincinnati’s defense.

Baltimore’s defense, who is always dangerous going into any game, did not have a dominant showing either. The Ravens’ defense looked tired due to Dalton’s accuracy which helped extended the drives for Cincinnati. Also, running back Joe Mixon tired down Baltimore’s defense with his consistent movement and huge gains.

Despite a valiant effort by the Baltimore Ravens, it wasn’t enough to overcome the play of Dalton, Green, and Cincinnati’s defense. The Bengals pulled away in the fourth to take home a 34-23 win over Baltimore.

The Ravens looked very good last week after defeating the Buffalo Bills to begin their season. However, they laid an egg Thursday night. They’ll look to regroup when Baltimore takes the field on Sept. 23 against the Denver Broncos. On the opposing end, the Bengals remain undefeated and will face the Carolina Panthers on Sept. 23.