Skip to content
You are here:Home-NCAAF, NFL, Uncategorized, WNBA-The Triple Double: Take a look in the mirror
Previous Next

The Triple Double: Take a look in the mirror

Ladies and gentlemen, welcome back to “The Triple Double”!

We are now at the beginning of December, which means only three things: angry shoppers, fruitcake and football controversies. And this month has started off with quite a few.

In this edition, we’re going to tackle the hypocrisy that is the Washington Redskins and the NFL, the College Football Playoff, and last but not least…the rumor of a basketball Hall-of-Famer potentially presiding over the WNBA.

First, let’s lay into the Redskins and the NFL.

1) THE NFL IS APPARENTLY NOT THE MORALITY POLICE

I was having a talk with my normal sports chat, and my friend over at the Niners Wire brought up this interesting point in regards to where we’re going here:

“Team that has a child beater and a woman beater…refuses to try out anthem kneeler.”

Of course, I took a quick second to figure out what he was talking about and what do you know? The Washington Redskins claimed the rights to ex-San Francisco 49ers linebacker Reuben Foster. For those who aren’t aware of who he is, I’ll fill you in: he is a second-year linebacker who was accused of domestic abuse earlier in the year before his girlfriend recanted the story.

This time, Foster was arrested at the team hotel in Tampa on November 24 on similar charges. The 49ers immediately released him, and he cleared waivers on Monday. Not even a full 36 hours had set in before it was reported the Redskins swooped him up.

Keep this in mind: this was the third time Foster had been arrested THIS YEAR and the second time for domestic violence. This is the same man who slipped all the way to the end of the first round of the 2017 draft despite being ranked the top inside linebacker prospect by NFLDraftScout.com. The same man who had failed a drug test at the NFL Combine.

It only gets better. A CBS Sports article showed that there was only one team that called the Tampa police regarding Foster’s arrest. Guess what? It wasn’t the Redskins; it was the Philadelphia Eagles, who decided that what they learned wasn’t worth the trouble. This is part of what makes it worse. The Redskins, knowing of Foster’s prior troubles, decided they wouldn’t even do the smart thing in following up with the police? Come the freak on.

Don’t worry, we’re not done yet. When asked by the media, four of the five current players on the Redskins who played with Foster at Alabama either gave no comment or said that the front office didn’t ask them about Foster. This completely contradicts the statement Williams gave above. Also note that in the article linked above, it was reported that while Redskins president Bruce Allen masterminded the deal, the front office was not unanimous in making the decision.

This only gets worse when you consider the comment that Williams made on Wednesday defending the team’s decision:

Williams apologized later for the statement, but that doesn’t move us away from the bigger picture here. The Washington Redskins have a player on their team who was charged with child abuse (Adrian Peterson) and a man on their team who is a serial domestic abuser (Foster). Yet Colin Kaepernick, whose only so-called offense was protesting the national anthem by kneeling to bring awareness to social injustices against African-Americans, couldn’t even get a call to try out after quarterback Alex Smith was placed on injured reserve.

I’ve accepted the fact that Kaepernick will most likely never see an NFL field again, and I think a majority of people have come to that same conclusion. But for the NFL to take his issue more seriously than they do with any sort of domestic violence (see the Kareem Hunt article), that speaks volumes about their morals and what they value.

2) SHOULD THE COLLEGE FOOTBALL PLAYOFF EXPAND?

I’m fully aware that this topic has probably been beaten to death, and that there are much more pressing topics I could talk about, like why the Toronto Raptors have a serious shot in the Finals against the Golden State Warriors (spoiler alert: they don’t stand a chance) or why the Seattle Mariners are gearing for yet another rebuild. But let’s be real: baseball isn’t what’s in and the NBA season is way too young for us to be talking non-title contenders, so college football wins.

As you are aware, championship season is upon us, and with that, the College Football Playoff committee is hard at work making some school’s dream come true while unforgivingly smashing the hopes of another. It’s just the nature of the beast. And as of right now, the Alabama Crimson Tide, Clemson Tigers, Notre Dame Fighting Irish, and Oklahoma Sooners are the four teams who will get to fight for college football supremacy. 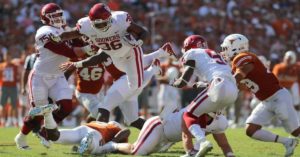 If you’re a fan of college ball (outside of the SEC), you’re probably getting tired of the SEC always seeming to get at least two teams in the playoff every single year. And surprisingly, even with Alabama beating Georgia for the SEC title on Saturday, the committee didn’t try to justify both teams getting in (though Georgia with two losses did get the no. 5 seed over a one-loss Ohio State team). This is where the committee needs to get pull its head out of its rear end.

As it stands, Alabama won the SEC title. Clemson won the ACC title, Notre Dame is an independent, and Oklahoma won the Big 12 title. No. 5 Georgia lost to Alabama while no. 6 Ohio State won the Big 10 title. And then you have the curious case of the no. 7 UCF Golden Knights.

The Knights finished the regular season undefeated for the second straight year in the row, and also won their conference championship. The only problem here: they play in the American Athletic Conference, which is not a Power Five conference. This was a serious controversy last season, as the Golden Knights finished 2017 as the only undefeated team in the nation and yet wasn’t in the Playoff (though the NCAA did officially recognize them as the no. 1 team in the nation).

This is where the playoff gets ugly. There are only four teams; the Power Five usually will fill those spots, even if that means you are getting a team that isn’t worthy. This year was no different; and based on the way the committee decided to make their decision, this could make for a nasty conversation after the season amongst the NCAA and its conferences.

Here is why I think this off-season could get nasty: you have a team in Notre Dame who did not have to win a conference championship. You also have a two-loss Georgia team that not only lost to the same team TWICE but got ranked higher than a one-loss team and an undefeated team, both of who won their respective conferences. That being said, the AAC and Big 10 have valid reasons to be pissed, especially if both teams end up winning their respective bowl games (Ohio State plays Washington in the Rose Bowl while UCF gets LSU in the Fiesta Bowl) and Georgia loses to Texas in the Sugar Bowl.

The resignation of former WNBA president Lisa Borders in October sent shockwaves through the league, as no one saw it coming. Her departure meant that the league would have its fourth president since the end of the 2010 season.

While it seems like the job has a high level of instability, there is one woman who is seriously considering stepping up to the challenge: Hall-of-Famer and former Los Angeles Sparks great Lisa Leslie. In a phone interview with ESPN, Leslie expressed her interest and why she thinks she’s the best fit for the vacant position. 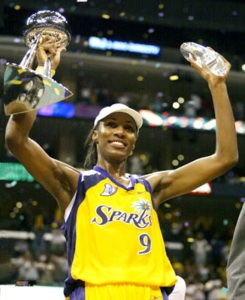 “It’s something that I am seriously considering to throw my name in for as well,” Leslie said. “I feel like I could continue to help guide us in the right direction. I want for the league to be successful and have the best president possible, someone who wants to stay and help it to grow.”

Leslie was one of the first draft picks in WNBA history, and her resume is impressive in its own right: eight-time All-Star, four-time Olympic gold medalist, three-time MVP, two-time champion, and one of the Top 15 players in league history. Since her retirement in 2009, Leslie has spent time as an actress (most recently in Uncle Drew) and doing sports commentary. So it’s safe to say that she has a pretty good reputation in the sports world.

However, with that being said, if Leslie is serious about taking over the top spot in the WNBA, she will need to learn from the mistakes of her predecessors.

Donna Oreander, who took over after the retirement of Val Ackerman (the league’s first president), cut her teeth on the PGA Tour. Yet in her time as the WNBA president, she did not make enough connections within the basketball community, a problem that proved costly. During her six-year reign as president, both the Houston Comets and Sacramento Monarchs folded. The Comets were the league’s first dynasty (winning the first four championships), while the Monarchs won the title back in 2005. They were also two of the original eight teams in the league (only three remain – the Utah Starzz moved to San Antonio in 2003 and are now the Las Vegas Aces).

After Oreander was Laurel J. Richie, who had never attended a WNBA game before taking over as president. While she had a background in marketing and picked up the basketball side of business fairly quickly, she never had the full support of NBA commissioner Adam Silver. Borders, who took over after Richie’s departure, had the full support of players, with the exception of their working conditions – a key reason behind why the players’ union opted out of their current bargaining agreement.

This will not be an easy adjustment period for Leslie, or whoever else takes over. For Leslie, though, that she has been on the players’ side of the bargaining table will be a huge help for her. Her legend status will also serve as an advantage as she tries to not only help grow the game but maintain the current progress that they have made in regards to marketing and presence.

Thank you all for allowing me to share your day with you, and I plan to have an early Christmas version of this column out in the next couple of weeks. Trust and believe there will be no shortage of topics. Much love, y’all.

About the Author: Chris Bullock

Before joining The Ball Out, Chris Bullock was part of SB Nation's Swish Appeal for nearly three years, covering everything women's basketball. Chris has had the honor of doing live coverage of the WNBA Finals, the NCAA Tournament, and also was given his own column, "The Triple Double". A self-described "foodaholic", Chris lives in the San Diego area with his wife and two daughters, and also hosts his own podcast, "Conscious Cravings", where he speaks about his experience as a mental health advocate.